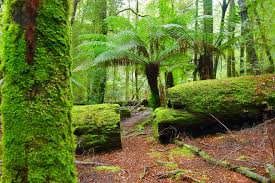 Known as Takayna in local Aboriginal dialect, the Tarkine is a 4470-sq-km stretch of temperate rainforest between the Arthur River in the north, the Pieman River in the south, the Murchison Hwy to the east and the Southern Ocean to the west. It’s a globally significant ecosystem, sometimes claimed as the world’s second-largest expanse of temperate rainforest, that encompasses vast forests of myrtle, leatherwood and pine trees, endless horizons of button grass plains, savage ocean beaches, sand dunes and extensive coastal heathland. Because of its remoteness, ferocious weather and isolation, the Takayna / Tarkine survived almost untouched by modernity well into the 20th century, and the region still offers a frontier-style experience for those keen to explore it.

The Tarkine is relatively undisturbed. It is a mix of rainforest, eucalyptus forest, rivers, mountains, cave systems and a basalt plateau that is still covered in original vegetation. It has valuable resources such as gold and tin and it has a history of mining. Visitors are allowed to experience this unique land in their own vehicles at their own pace.

Majority of Tarkine’s unique values, however, are under threat. There are various destructive activities such as new mining, logging, and illegal activities such as poaching and arson that take place in this region. What’s more alarming is that less than 5% of the Tarkine is protected as a National Park.

At Enviro Trips™, we think that raising awareness about threatened ecosystems and especially the last remaining frontier forest systems like the Tarkine might inspire young minds to appreciate and conserve it.  We offer educational school trips to Tasmania aiming to connect young minds with untouched nature and communities.